Tesla first sent a wireless transmission from his laboratory at Houston Street in New York City to a boat on the Hudson River - 25 miles (40 km) away - in 1897; he would've done this sooner but for a fire that destroyed his previous lab in 1895. Tesla invented everything we associate with radio - antennae, tuners and the like - but an inventor named Guglielmo Marconi was given the actual credit. In 1943, the U.S. Supreme Court ruled that Tesla's patent had precedence, but the public already considered Marconi the father of radio.
Which brings us to his radio-controlled model boat. He had been slowly developing this concept since 1893, building better and better mechanisms, showing them to visitors at his laboratory. "In 1896 I designed a complete machine capable of a multitude of operations. But the consummation of my labours was delayed until 1897....when first shown at the beginning of 1898, it created a sensation such as no other invention of mine has ever produced."
Although Tesla's model boat had been eye-witnessed by thousands of spectators at Madison Square Garden, he was only able to obtain a basic patent in November 1898, after the Examiner-in-Chief had come to New York and personally witnessed its performance for himself — having
hitherto protested that such an achievement was impossible.
Whilst the US Patent granted was Number 613,809, the UK Patent No 26.371, applied for in December 1898 was accepted on 9th December 1899 - 22 days before the 20th Century
began.
In brief summary, it reads:
"l, Nikola Tesla, of 46 East Houston Street, New York, United States of America, Electrician ....declare that what I claim is: The improvement in the art of controlling the  movements and operation of a vessel or vehicle herein described, which consists in  establishing a region of electrical waves or disturbances, and actuating by their influence, exerted at a distance, the devices on said vessel or vehicle, which control the propelling, steering and other mechanism thereon, as set forth...()...The sensitive device herein described, comprising in combination a receptacle containing a material such as oxidised metal forming part of an electric circuit with the material, and an escapement controlled by said magnet and adapted to permit turning the receptacle end for end, or half a revolution, when the said magnet is energised, as set forth..."

It's not what comes to mind when someone mentions "radio-controlled model boat" but Tesla was at the forefront of the technology we now enjoy. 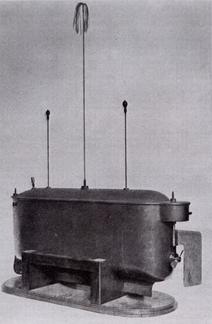 You may be surprised to know that Nikola Tesla was the first person to demonstrate a radio-controlled model boat.
If you couldn’t imagine life without your TV remote, thank Nikola Tesla for making it possible. Tesla invented, predicted or contributed to the  development of hundreds of technologies that play big parts in our daily lives -- like the remote control, neon and fluorescent lights, wireless transmission, computers, smartphones, laser beams, x-rays, robotics and, of course, alternating current, the basis of our present-day electrical system.
During the war of the currents, alternating current (AC) - favoured by Tesla - battled for wide acceptance with direct current (DC), favoured by Edison. At stake was the basis for the world’s electrical system. Edison launched a campaign against AC, claiming it was dangerous and could kill people; Tesla countered by publicly subjecting himself to 250,000-volt shocks to demonstrate AC’s safety. Ultimately, alternating current won the fight.

Tesla designed the first hydroelectric power plant in Niagara Falls, New York, harnessing the power of the waterfalls he had marvelled at since childhood. Construction took three years and power first flowed to homes in nearby Buffalo on Nov. 16, 1896. A statue of Tesla on Goat Island overlooks the falls today.

A display showing the internals of Tesla's model boat in the Nikola Tesla Museum in Belgrade, Serbia. Photo from http://www.teslasociety.com/teslamuseum.htm.

A plan view of the model boat Tesla submitted with his patent.

As mentioned, Tesla demonstrated his new technology in New York's Madison Square Garden in 1898. Using a small, radio-transmitting control box, he was able to manoeuvre his tiny ship about a pool of water and even flash its running lights on and off, all without any visible connection between the boat and controller. Indeed few people at the time were aware that radio waves even existed and Tesla, an inventor often known to electrify the crowd with his creations, was pushing the boundaries yet again, with his remote-controlled vessel. 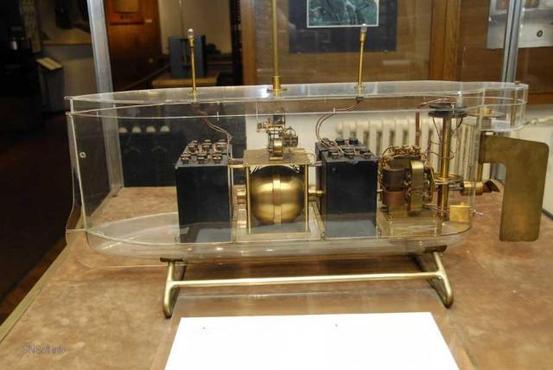 Tesla concealed the full potential of his invention because he hoped the US Navy would seriously consider using it in a war. For example — a system to prevent interference by means of co-ordinated tuning devices responsive only to a combination of ‘several radio waves of completely different frequencies. Another was a loop antenna which could be completely enclosed by the copper hull of the vessel; the antenna would thus be invisible and the vessel could operate completely submerged.
Tesla was later to remember: “When I called on an official in Washington with a view to offering the invention to the Government, he burst out in laughter upon my telling him what I had accomplished. Nobody thought then that there was the faintest prospect of perfecting such a device."
But he persisted, for a while. A subsequent patent included specifications for a torpedo boat without crew, including motor storage battery to drive the propeller, smaller motors and batteries to operate the steering gear, and still others to feed electric signal lights and to raise and lower the boat in the water. Six 14ft torpedoes were to be placed vertically in two rows so that when one was discharged another would fall into place...