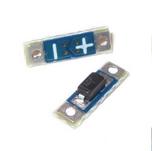 Next club meeting will be on Tuesday at 7:30pm on 8th September, subject to any COVID-19 health restrictions.

In his article above, Rowen mentions the use of a LED driver. These are extremely useful devices and can take all the headaches of figuring out how to wire your LEDs. Simply insert one into your circuit and your 20mA LED will light up as it should.
This simple device limits the current through itself to 20mA. When a voltage is applied (anywhere from 2 to 45V) it will actively adjust it's own resistance to allow just 20mA (+/- 3mA) to pass through. This makes it a perfect replacement for current-limiting resistors in LED circuits, and you won't have to calculate resistor values or worry about a varying voltage source.
The current limiter can be placed anywhere in the loop with LED's, but needs to be placed with the proper orientation, or it and your LED's could be damaged. The board has 0.032" solder holes which can accommodate wire down to 22AWG (tightly twisted) or standard 0.1" header pins. Note that at least ~2V across the current limiter is required for proper operation - below that and the current output will start to decrease and the LED's to dim. Multiple current limiters can also be placed in parallel to add current (40mA, 60mA, etc...).
Units are provided on a scored circuit board that can be broken apart using pliers and/or strong fingers. Size: 0.334 x 0.100 x 0.077".

More information can be found at: https://lighthouseleds.com/20ma-led-current-limiter-driver.html .

These items are sold locally by Nutech.

At the end of the last update, I had finish painted the hull black with red underside and grey decks. The hull had been sprayed with a matt aerosol to deaden the paint gloss.

​​With the hull essentially complete, apart from adding deck detail, it was time to move to the superstructure. Drawings for this vessel are very limited, fortunately there are several photographs on the Internet. It seems the three vessels in this class all differed slightly, although those differences could have arisen in refits as the vessels aged. I decided to focus on Seal in her original build state as I have the most information on this configuration.
I defined the superstructure base outline using 1/4” square balsa strips glued to the deck. This locates the superstructure and provides a lip to prevent water ingress. The port and starboard sides differ as the port included a large doorway into the accommodation spaces. I cut the port and starboard superstructure sides out of styrene sheet and clipped to the balsa strips. Was then able to make up the various bulkheads, also in styrene before glueing into place. I also added a round tube and various 1/16” sheet horizontal panels to add stiffness. These worked, leaving a self supporting and light structure. The front panel was also made from styrene sheet, heat shaped and the windows cut out. I continued to then add detail, all made from the usual amalgam of wood and styrene sheet augmented with a few commercial items.
The only deck feature that is unusual is the R.I.B. launch crane. Fortunately the earliest iteration of the Seal used a simple rigid jib crane with a winch to raise and lower and another one to swivel the jib from the vessel centreline to over the deck edge. After much thought i decided the hook raise/lower function could be achieved by using a drum fastened to a 360 degree movement servo and the rotating function replicated using another servo that would rotate the crane jib. This was attached to a shaft that passed through the centre of the crane body and under the deck where it was moved by a pulley and belt drive to the servo. I can now see why this arrangement was replaced with an articulated hydraulic crane in a refit! The RIB swings when lifted and has to be carefully guided past the engine room intakes. Probably not practicable in any kind of seaway.
I continued to add the usual selection of navigation and spot lights, also a radar scanner. The light installations were considerably eased by our local electronics shop now stocking a driver that limits current in an LED circuit to 20 mA. This means any number of LEDs can be added into the circuit (up to the max. battery drop voltage) without corresponding resistors. The wiring is simplified enormously.  Finally I had four circuits working, two lighting for the navigation and spotlights and one for the radar scanner motor and wheelhouse lighting. All controlled by an overall RC switch and individual circuit micro switches.
I used the idea previously tried on my Brave to have brush-style connectors on the hull with corresponding copper pickups on the underside of the superstructure. These obviate the need for wires that link the superstructure and hull, making removal much easier. Some miscellaneous detail was added to complete the model. I had to deviate from my usual focus on building accurately to scale as some detail is not shown on either the plans or photographs. Fortunately “Modelers License” helped.
In summary, an interesting build of a little known vessel, a build that makes an attractive model and one that sails well with a straight forward, brushed motor powertrain.

Thanks to Rowen and Garth we are able to give you updates on their activities during the present restrictions.

Paul has a great maxim for these unusual times: "I am determined NOT to have to say, when this is all over, “I should have done (fill in the blank) when I had all that time on my hands”."

On 1st July I went to Spencers  to run Corona Extra & it had a couple of problems, rudder control backwards & after a half hour speed control cut out due to motor overheating. Most importantly no leaks so it was back to the dock for repairs.

Repairs were completed and it now sails well, just needs a little adjustment in the trim.