. . . . as Steve M can attest.
A few of us were down at Spencer’s one Sunday running a variety of models. I ran my Tempo hydroplane for about 5 minutes at one point. It ran well on two 7.4 volt Li-Po batteries that are wired up in series to deliver 14.8 volts to the motor. I’ve used two 3 cell Li-Pos in the past but that is too fast for Spencer’s.
Finished the run and brought the boat in and lifted off the hatch. The motor was cool and the batteries only slightly warm so it was a good run.
I heard a hissing and suddenly there was a dense cloud of grey smoke pouring out of the Tempo and a flicker of flame. Ken grabbed the battery out of the model and tossed it onto the ground where it burst into flames.A quick dowse of coffee put out the flames and the excitement was over.
Quite unexpected and puzzling. I slow charge the batteries so they are not subject to stress during charging. The battery was one of a set of two that I have had for 3 years I think. I have used the set of two either as a matched set in the Tempo or as singles, but almost always with brushed motors which are actually supposed to be easier on the batteries.
A caution to all members to be careful of how they store their LiPos and beyond that I am still at a loss to explain what happened to me so all thoughts and ideas are welcome.

Because of self-discharge, some batteries may need to be topped-up.

Some alternative thoughts from Roy.

My first choice for batteries is NiMH, and only if I need need greater capacity or lighter weight then Lipo.

I can recharge NiMH batteries immediately after a sailing session, replace them in a boat, and they lose a negligible amount before my next session with that boat after a couple of weeks. Lipo's have to be charged or discharged to 3.8V per cell after a session, put into storage, and then recharged before sailing. For three of my boats I don't remove the batteries for charging, they are connected to a socket I plug the charger into.

Winter storage of our batteries.

Steve M has provided his thoughts on battery selection.

The traditional sealed lead acid battery is something we are all familiar with, and it has been around for decades.It is heavy, which is great if you have a large, scale model where you plan to use the battery weight as ballast.

Otherwise, the down sides are that they have a slow discharge rate, which is not good if you are needing to draw out energy quickly. They are slow to charge. It is also difficult to ascertain how full a charge the battery has. They have the advantage that you can ‘top them up’ or trickle charge them with no impact on battery life or performance. They are also available in fairly sizable capacity (amp hour) ratings, which is great for a long running time, at a fairly sedate pace.
Otherwise, there is little to commend this type any more, as newer battery versions have had their impact.

Nickel-Cadmium(NiCad)
The next popular batteries on the scene were the 6 cell NI-Cads.

They were immediately popular for all the disadvantages that the sealed lead acid had. They are lighter, could handle a fairly high discharge rate, charged quickly, and were relatively compact. There are some new charging and storage issues to be aware of, mainly that you shouldn’t ‘top up’ the battery when only partly discharged, but rather discharge them down to a low charge, and then charge them up to full. There was a chance that you could alter the overall capacity of the battery if it was not discharged first. Their biggest advantages over the sealed lead acid were a fast charge rate which meant that you could charge them out at your running site if you had access to power (12 volts or 110 volts) and so use them repeatedly after 15-20 minutes of recharging. When they were first introduced the capacity (amperage) was rather small as compared to lead acid, but they quickly evolved into larger and large capacity batteries, reaching a point that 5000 mA (5 Amp) batteries where quite normally found.

The Ni-Cads were followed by NiMH batteries which were  physically much the same as Ni-cads in most respects, but had the single huge advantage that if you were unsure of the level of charge in the battery, you could ‘top up’ the charge with no concerns of degrading the performance or capacity of the battery.

LiPo (Lithium Polymer)
The most recent and popular batteries for hobby use are Lipo batteries, which has raised the stakes once again. They can be had with a modest amp rating, and a very small size, or much larger amp ratings with an associated increase in size, rivaling the dimensions of the sub-C NiCad and NiMH 6 cell batteries.

LiPos are newer technology (meaning higher prices) but new features. The single most significant feature is that there is the ability to ascertain the voltage of each of the cells within the pack, and to confirm that they are all reading the same voltage (balanced) and that the overall capacity (% of a full charge) of the battery can be determined, to help guide your charging decisions. Topping up appears to be an OK practice, if you are seeking peak performance from your LiPOs. There appears to be a greater risk of batteries shorting out if they are not maintained properly, with rather ‘heated’ results!

Charging.
Please note that in every case, chargers have to be matched to the type of battery being charged, as the newer batteries and chargers have more and more technology built into them, that require a matching of the battery and charger type. In all cases it is very important to match the charging rate to the capacity (amperage) of the battery, so as to not charge it too quickly and potentially damage the battery and/or the charger. All chargers sold have explicit instructions to be followed, to ensure a safe charge and safe use of the batteries.

Heat is the enemy of all battery types, regardless of what type. The newer battery type are more dangerous if not managed according to manufacturers’ instructions.

Personally, I am using LiPos on all my scale boats now, taking advantage of being able to determine exactly the condition of each battery, and not having to find out at the pond when my boat dies on the water after a short running time that the battery needed recharging, or worse, that it will no longer take and hold a charge as the battery life is finished.

Li-ion and Lipo are equivalent.

SoC refers to State of Charge, full charge being 100%.

Li-ion and Lipo are equivalent.

SoC refers to State of Charge, full charge being 100%.

On the same day that Steve reported the above, Roy was desoldering a pack of NiMH cells to remove a dead one. For no apparent reason one started to smoke and sizzle. It was held in a rubber-jawed vice at the time, and the jaws suffered no ill effects. The photo shows that the cell had expanded and split its wrapper. 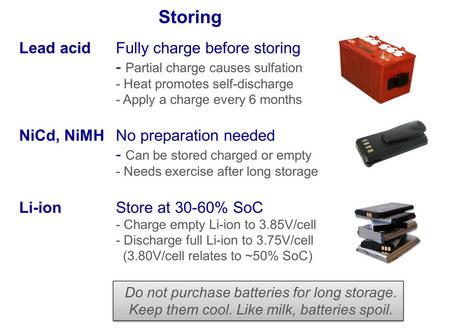 "State of charge" should not be confused with capacity. Capacity declines but the reduced capacity can still be displayed on your charger as "fully charged".

Some just smoke and sizzle . .

Choosing the type of battery to use.

Winter storage of our batteries.